The right of the people to be secure in their persons, houses, papers, and effects, against unreasonable searches and seizures, shall not be violated, and no Warrants shall issue, but upon probable cause, supported by Oath or affirmation, and particularly describing the place to be searched, and the persons or things to be seized.

I watched Brian Williams interview Edward Snowden. If you think he's a traitor, that's fine, this isn't about him.

Williams asked Snowden something like, "What about the public attitude held by millions of everyday Americans, um, 'All I've got on a computer is pictures of my family', uh, 'CCTV cameras that are prevalent in a ton of American cities and overseas capitals, those cameras are your friends if you're innocent and have nothing to hide'?" (The question in the interview starts here, you can listen to Snowden's response there as well)

Williams and all Americans who are of that opinion have a valid point, if one lives in a democracy with a fairly honest government*.

Once a country slips into dictatorship, or if one already lives under a dictatorship**, if you're a fairly honest person just trying to make a living, or trying to get ahead... or tons of stuff: Your 13 year old daughter gets snatched up off the street by some henchman in service to the dictator and you decide to make a stink about it, I mean, the affronts to your humanity or manhood can become bounded only by sick imaginations...

That's when all those cameras become your enemy.

And, I can hear tons of Americans going to, "Well I've got my guns, I'll be coming for you." I love the sentiment, the reality is, that's the first thing a cabal looking to install a dictatorship comes for. If you bought your guns legally, i.e. there's a paper trail, if the shit starts getting hot, you'll probably want to report it stolen, then hide it properly. Since you didn't stand up for the fourth amendment, uh, gonna guess anywhere in your home is a bad idea, metal detectors and all. Stock up on ammo before it gets hot too, and don't trust the ammo. Once they get an idea that they're in range, these are the most devious fucks you'll ever come across. Sample the ammo, make sure it's a good batch, then store it hermetically sealed. Figure it out amongst yourselves, but for starters, I wouldn't trust a dank basement.

back to the Fourth Amendment. Imagine during the lead up to our Revolutionary war, our good buddy Trump, er, I mean King George had cameras everywhere, could listen in on our phone calls, gather meta-data, track us by the GPS's in our phones, etc. I'll conject there never would have been a revolution. All the "rabble-rousers" wanting freedom from tyranny would have systematically been picked off by the dictator "King" george's hitmen, goons, etc.

Stand up for the fourth amendment!

And, personally, I'm of the opinion that in the long term laws should tend to complete transparency rather than laws that somehow restrict a select few with the power to look at you from not doing so. It's a really complicated thought for me though, I mean, thinking of that one Aesop Fable, summed up with symbolism in the Disney version of... Pinocchio(?) (the one with the kid from Home Improvement, dunno how many would get the message). Bottom line, I'm all for weeding out obvious problems to humanity before they get started, the problem is, who makes those decisions? Generally, I trust my elders. But then some douche

* where there's not a massive concentration of wealth and/or power. Black and white turns into grey areas pretty quickly, depending on what country, what era, etc. For another day.

** and don't confuse titles with reality. Putin isn't a president, he's a dictator. Should he ever get complete 100% control, he'll change his title to something like Idi Amin's. The control-freaks are just like the greed-driven fucks, crack addicts, there's never enough. Idi Amin's self-appointed title? "His Excellency, President for Life, Field Marshal Al Hadji Doctor Idi Amin Dada, VC, DSO, MC, Lord of All the Beasts of the Earth and Fishes of the Seas and Conqueror of the British Empire in Africa in General and Uganda in Particular" Lol, can you imagine what Cadet Bonespurs' title would be if he had the lattitude for how long Amin did? Here's black president Trump (the weight looks about right, so does the brain power): 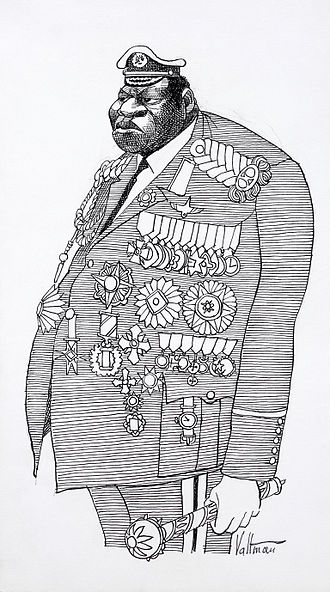